This morning was supposed to begin with a 4 mile easy run but that was promptly halted by the rain and cold.  With warmer temperatures and sunshine promised in the afternoon, I thought that would be a more enjoyable alternative.

After getting an extra glorious hour of sleep, I dragged my butt out of bed to get ready and have some breakfast.  Nothing new or exciting over here unfortunately…

with almond milk and coffee of course.

After sitting in much more traffic than yesterday I made it to work only about 5 minutes late (but still before everyone else).  The morning flew by as I feel it often does in my job and suddenly it was lunch time.  I had to run a few errands before tackling a fantastic salad and some other lunch regulars. 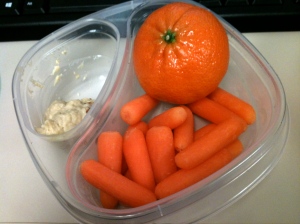 Hummus and carrots and a clementine (but the clementine was no good so I subbed it out for a banana).

Once treatment sessions were finished in the afternoon and it was note writing time, I could no longer resist the Samoas that were starring me in the face, so I had two of those bad boys (totally worth it).

Once I fought traffic and made it home I figured it would be better to do my 8-mile tempo run today and save the 4 for tomorrow morning so that I wouldn’t have to get up as early.  I am learning that tempo runs here are probably best done based on effort rather than pace due to the hills but in my hard headed fashion I hit my pace markers I had set for each mile even though death was imminent.

After my run, I showered up, scarfed down some dinner and got set up to review my practice exam I took last night.

Herb pork, jasmine rice and brussels (simple and to the point)

During my studying I had to reward myself with a small snack of raisins before having a dessert of greek yogurt with the Metropolitan Bakery Pomegranate Cinnamon granola I am obsessed with.  My portions keep getting smaller and smaller because I don’t want them to run out.

Hope you had a great Wednesday, half way through the week!  Only two more days until I get to finally head back to Charleston and see Casey and my puppy girl Scarlett!