This day couldn’t have turned out any more coincidentally if I tried.

On my run with Scarlett this morning, everything was going great.  As we turned around and ran along the battery my stream of consciousness was flowing.  Look at the sunrise, ooh its hitting the water so nice, that tug boat is pretty cool, I wonder who drives tug boats, that must be serene, this run is kind of serene, serenity now, SERENITY NOW.  Then I perseverated on this episode of Seinfeld for a long time.  It was funny that this was so prominent in my head at the time because I actually was not in need of the phrase “Serenity now,” I was already serene.

Post run I had a normal routine, shower, breakfast, check e-mail before heading out for my bike ride to class (a few minutes ahead of schedule, which never happens).  I hopped on, peddled three revolutions and BOOM!

I hurried inside, got my bike pump, no go, too flat.  SERENITY NOW!!  So I ran back inside, grabbed my car keys and ran out the door.  I have no where to park my car at school which I forgot in my “solution” to the tire problem but luckily I just street parked and didn’t get a ticket.  Whew.

Post class, I had to drop Casey off at his dad’s which was really close to where I was doing my pediatric evaluation two hours later so I just packed up some stuff not come back in between. First stop was to get a new bike tire, then I treated myself to a half salad from Panera Bread for an early lunch.  I highly recommend the one I got, it was fantastic!!  And the major kicker was it only had 170 calories so it was the perfect snackish thing to hold me over until the eval was over.

Then I came home to brave the bike tire! SERENITY NOW!

So far so good… 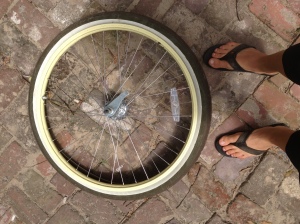 Putting that tire back on was nearly the death of me.  20 minutes later I was sweating like crazy, had the greasiest hands, but I felt accomplished.  It was one of those life affirming times where I felt like I can really do anything for myself, even if I am clueless about it!

One thought on “Serenity NOW!”