First, advice from an idiot.  Don’t eat a burrito and then do 4x quarter mile hill repeats two hours later.  It is the sure fire way to make you feel like your intestines are burning!!  (From experience yesterday, although by some miracle my splits were actually good). 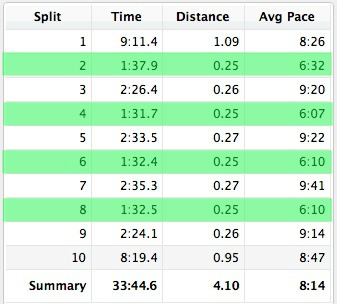 Today was my first day back for the summer semester.  After taking a peaceful early morning jog with the pupster I had high hopes for how today would go.  I had plenty of time getting ready, no rushing around.  Took a nice leisurely bike ride to school and enjoyed the beautiful weather.  That was pretty much where my inner peace ended.

I knew this semester was going to but nutso but I had no idea how much!!  By 10:00 this morning my class schedule had already changed for the day which completely eliminated my ability to go to work or get any studying done.  Apparently this is what we have to look forward to over the entire summer.  This is not ideal for someone that literally plans every second of the day so when changes arise, I am not the most flexible individual.   I am going to have to learn this skill though because otherwise I am going to make myself crazy over things I can’t control.

In the middle of this day we also were presented with our choices for our final two clinical experiences.  Casey and I had planned to go to Denver for the last two but those aren’t going to be offered as options so now we are in a rut.  It is quite the dilemma because I want the best clinical experiences I can possibly get but leaving and finding housing for two month, by myself is daunting.  Those big decisions have to be made June 19th for the third clinical and 26th for the last one so by June 27th I will know my future until that whole big girl job thing will have to kick in.

My way to deal with stress is usually to run, but since I had already done that I came home and started making lists, calendars, spread sheets, pro-con lists.  You name it, I did it.  All these insane obsessive compulsive things I was doing pretty much just told me that I don’t have a lot of control and the best thing to do is just to start from the top and actually ACCOMPLISH something.  Making lists and stressing about the things that had to be done didn’t actually work toward tackling the giant amount of things I need to do, but diving in would.

So I cleared my desk, got out materials to study for comps and hopped to it and I feel so much better for it now.  I can actually say I got something done tonight.  This may be a major break through for this girl.

But I will tell you one thing, I can’t wait for my moments of peace tomorrow morning on the road where I can leave it all behind, even if only for a 35 minutes.

3 thoughts on “What do you do with your stress?”