FINALLY GOT MY COMPUTER BACK, YAY!!!!

Things like that never happen unless it is the least opportune time.  For instance, in the middle of two weeks where you have three mid-terms.  Granted, I know I only didn’t have it for two days but I take most of my class notes on my computer so for the past two days I kept going to study for my test Tuesday and didn’t have what I needed.  The saga is over now thank goodness!

So to recap the past few days:

I was so excited to go to this fitness class at my gym called Joe-D Bands.  I went to the gym and ran for a while before the class started and then headed over.  Things were going great, it was a work out with 6 exercises that you did 20 reps, 30, then 40 with a lap on the track in between sets.  I was kicking major butt and loving the class (still a little sore) and when I came back from the lap between 30s and 40s the instructor had changed!  The new guy that had come in had changed all the exercises so I had no idea what I was doing, he changed the number of reps of everything.  I just got so frustrated, with 15 minutes left in the class I just got my stuff and left.  My head wasn’t in the game because I couldn’t figure out what I was supposed to be doing and I knew I had already gotten a good work out in so that was that.

After that debacle, we went to our friend’s house for dinner.  I made Bruschetta Bread Bites for an appetizer and Red Velvet Cupcakes for dessert.  Our friend made a Mango Pulled Pork that was AMAZING!

These are super easy to make.  Recipe linked to picture. 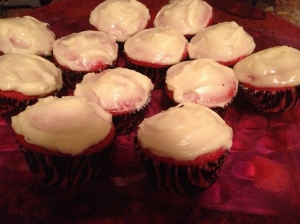 Terrible Picture, but they were sooooo good!

I used the Paula Deen Recipe for these (so we know they were terrible for you) but they were amazing.  I followed the recipe to a T except for the frosting.  I added all the wet ingredients and then just gradually added the sugar until I got it how I wanted it.  I definitely didn’t use the whole box of powdered sugar.  (Made 24 cupcakes).

We got the pups together during dinner too and they had a blast, and then slept all night which was great. 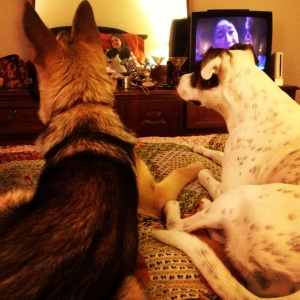 Last night we went to a wedding, so today has been lazy (the downside of drinking for me is being out of commission the next day for sure)!  But we had a great time which is worth it since we don’t go out and drink often.

Hope everyone is having a great weekend, it is super chilly and rainy in Charleston (great lazy study day!).

Have you ever had a negative fitness class experience?  Did you try that same class again?