Wednesdays are my busiest days of the week.  I have class from 8-4, had a board meeting for our student run free clinic during lunch and then had running group tonight.  Since I had to pack my lunch I made an awesome salad, it is the easiest thing for me to pack to take with me. 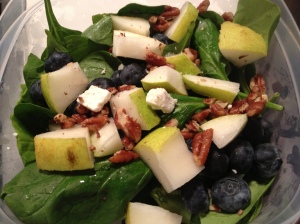 By the time run group came around I was so tired but I was excited to get to lead this week.  When I got there, no one wanted to do the five mile run (only three mile takers tonight).  As bummed as I was, this actually worked out better for me to only run the three with the race coming up and I am just going to lead next week (probably very slowly!).

I just wanted to do a quick product review before signing off for today.  About 4 months ago I bought the Kor Delta Hydration Vessel.

I really liked it up until today.  I dropped the bottle about 2 feet and the entire lid piece shattered.  It was literally in 5 pieces, not salvageable.  I understand that these kinds of things aren’t invincible but it should have been able to sustain a fall from that height.  I would not recommend this product to someone who uses their water bottle daily and it carrying it around a lot (it is just bound to fall).

Since I was already at the Lululemon store tonight I was looking for one there.  After the girl at the store pushed it off a shelf from five feet high and it just bounced around and was fine I was convinced, this was the one I needed. 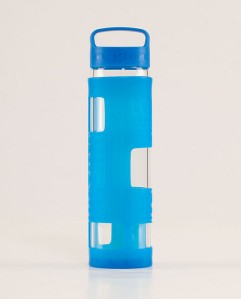 So far I can’t really give an honest opinion about it, but after using it for a while I will keep everyone posted.  I do have to say that water tastes so much better out of glass than plastic!

Half way through the week everyone, getting close to that weekend!