Up until now, I had never thought to tell my story of how I got to where I am today, health and fitness wise since most of my effort was before I started blogging.

Two years ago today, just after graduating from college, I was the girl on the left weighing in at 155… 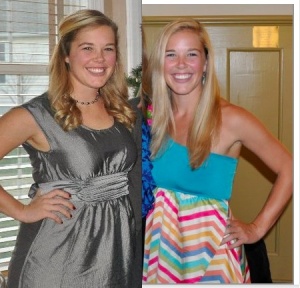 Even through high school I was never a small girl (short yes at 5’2″) but not small.  I played field hockey, ran cross country, swam one season and played lacrosse.  I continued playing club lacrosse in college and even ran my first marathon.  Despite all of that I was never in a healthy weight range.  I had pretty much accepted that I was just never going to love the way I looked.

However, when my marathon was over, I stopped running.  I sporadically went to the gym and at times was considering lacrosse practice 4 days a week enough.  Some practices this would have been, but others were slightly less aerobic.  I ate well for a few weeks and then would do whatever I wanted for a few weeks and yo-yoed between those philosophies of life.

January 4th, 2011 I stepped on the scale and weighed more than I ever had, 155 pounds.  I knew I needed to slow this process or it was going to be a slow creep up, for the rest of my life.

At the beginning, that first spring, I had to be a little crazy, eating fruits and veggies only for breakfast and lunch and then just eating a small portion of whatever my mom was making for dinner.  No carbs unless they were with dinner, and only a minimal amount.  I think I really needed this to get started, but I ended up contributing to my anemia.  Once I recognized this while training, I got it under control and proceeded on.

During that same spring, I trained for and ran that half-marathon and lost 15 pounds.

By the time I was ready for my big move to Charleston, I was 137 pounds, happy, confident and motivated to keep going.  My goal had been 135 which I had always thought was unattainable but I reached it and kept pushing.  By the end of that year I was 131, 25 pounds less than the year before.

The best (although annoying) thing was when I tried to put on the ‘professional’ clothes I had bought in January during that first summer in Charleston, they didn’t fit.  AT ALL.  To the point that my roommates told me I looked silly in the clothes.  True proof that all the hard work was paying off.  Although seeing the numbers go down on the scale was motivating, this was a whole different level of encouragement.

It didn’t come easy.  I worked hard and made good choices but I wasn’t perfect.  I had a piece of cake or a bowl of ice cream here and there.  If I hadn’t, I would have rebounded back to craziness.

I wanted to share my story to helpfully motivate at least one other person.  It was a long road but I came out 30 pounds lighter with exercise and healthy eating in every day of my life. 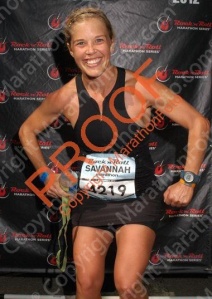 Start working today to be a stronger, fitter, healthier, happier YOU!!

3 thoughts on “My Weight Loss Story”