I headed over a bridge out of down town that I usually run on for my longer runs and then headed in a direction I have never gone.  I found a trail I didn’t know existed, granted it was short but I went out a mile and back a mile along the water which had a beautiful view and it was 2 miles down.  Then I continued down to a Charlestown Landing where our friends got married and ran a lap through the park there and turned around to head home.

My book is so suspenseful right now it really kept me distracted.  I thought this run was going to be painful since I hadn’t run longer than 11 miles since the marathon (almost a month ago now) but I am barely even sore even a few hours after finishing and sitting around working on my dreaded research paper.

We had gnocchi for dinner and I had no idea what to do with it since I have never cooked it before so I just invented something from what we had.  It turned out to be pretty good and very filling after being nearly starved post run.  Click here for Recipe. 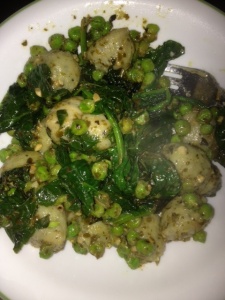 After my spontaneous running adventure today I wondered, do most people that long distance train plan their routes before they go?  Do you run the same routes or change it up everytime?